Regional leaders have insisted the West African country return to civilian rule. The new interim president is a retired colonel and former defense minister who served under the ousted president. …

DAKAR, Senegal — A military officer who helped depose the president of Mali in a coup last month has announced that a retired colonel will lead the West African country as interim president until elections are held in 2022.

Malian soldiers abducted the former president, Ibrahim Boubacar Keïta, and made him resign on state television in August in a coordinated coup that capitalized on a ballooning popular uprising against the government.

Regional leaders from the Economic Community of West African States had tried but failed to mediate talks with the protest movement before the coup. After Mr. Keïta was overthrown on Aug. 18, Ecowas leaders met with the coup plotters in an attempt to limit the period of time before the next elections were held and to insist that a military officer not lead the interim government.

Though the new president, Bah N’Daou, is technically a civilian, he is both a retired military officer and a former defense minister who served under Mr. Keïta. He also served as an aide to Mali’s former military dictator, Moussa Traoré.

Mr. N’Daou’s appointment was announced in a statement on Monday by Col. Assimi Goïta, who was the leader of the coup against Mr. Keïta and who will also serve as Mr. N’Daou’s vice president. Both men were appointed by a group of 17 electors chosen by the coup leaders and will be sworn in on Friday.

Announcing the new president on state television, Colonel Goïta said that there had been different views on who should lead the interim government before elections. “Some wanted a purely military transition, others wanted a civil transition, and others proposed a mixture,” he said. 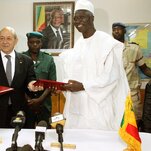