Mali’s president was elected after a coup. Another coup just removed him from power. 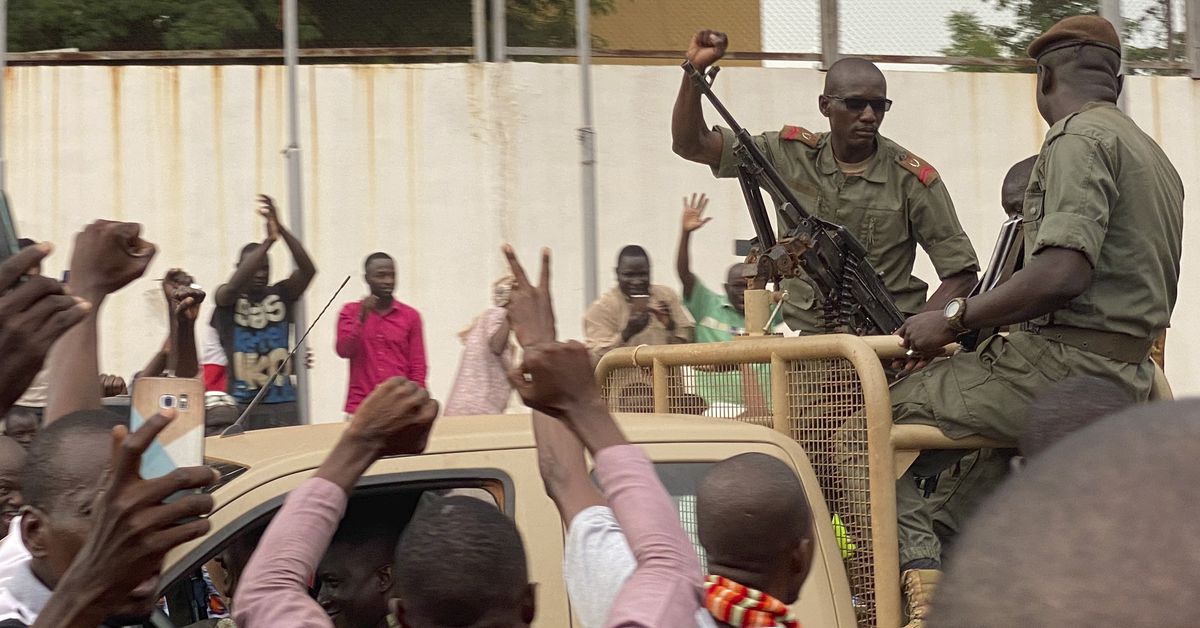 “If today, certain elements of our armed forces want this to end through their intervention, do I really have a choice?” he said in a statement on state television. “I hold no hatred towards anyone, my love of my country does not allow me to,” he added. “May God save us.”

The dramatic incident capped a turbulent decade for the West African country — one marked by terrorism, corruption, and possibly stolen elections that sent thousands onto the streets demanding better from their government.

After weeks of protest that saw deadly clashes between demonstrators and government forces, some mutinous soldiers took matters into their own hands. Equipped with weapons taken from a nearby base and with music blaring, the troops live-streamed their drive to the capital of Bamako on Facebook. Upon arrival, and cheered on by hundreds in the streets, they went to President Keïta’s residence and arrested him as well as the prime minister, who was also at the residence.

Around midnight, the 75-year-old Keïta — known commonly by his initials IBK — appeared on state television to announce he was stepping down from his post, which he’d held since being democratically elected in 2013 (and then reelected in 2018).

“For seven years I had the happiness and the joy of trying to straighten out this country,” he said. “I don’t want any blood to be shed to keep me in my position,” he added, noting his government and the country’s legislative body would be dissolved.

The relative ease with which the coup leaders — many of them trained as soldiers by US, Russian, and other international militaries — dismantled the government has experts wondering if the operation was long planned, and if the lack of fighting between military units suggested widespread coordination among Mali’s forces.

“This appears to have been organized and thought through,” said Andrew Lebovich, an expert on West African security issues at the European Council on Foreign Relations.

So far, it seems the National Committee for the Salvation of the People, as the military junta calls itself, has no desire to actually run the country. Instead, the committee, which is made up of a mix of colonels and generals, says it will provide transitional leadership until new elections can be held — though it’s unclear when they might take place.

“We are keen on the stability of the country, which will allow us to organize general elections to allow Mali to equip itself with strong institutions within the reasonable time limit,” the group’s spokesperson, Col. Ismaël Wagué, said in a statement.

That could be a sincere commitment, as coups in 1991 and 2012 ended in relatively quick handovers of power to civilian authorities. But the junta’s guarantee hasn’t satisfied outside observers. Regional political blocs including the Economic Community of West African States (ECOWAS) and the African Union, as well as the EU, the UN, and the United States have either condemned the move as unconstitutional or demanded the junta release Keïta along with the prime minister and other officials who were detained.

“The United States calls on all political and military actors to work towards a restoration of constitutional government,” Secretary of State Mike Pompeo said in a Wednesday morning statement.

The 15-member ECOWAS has taken further actions, including closing the border to Mali, ending financial flows to the country, and even ejecting Bamako from any decisions the body makes.

Despite the surprise nature of the military takeover, though, few experts were surprised a coup proved Keïta’s downfall. Not only does the country have a long history of them, but it has suffered from terrorist, militia, and criminal violence throughout Keïta’s presidency.

Add to that years of unabashed government corruption plus a spring parliamentary election many believe was skewed to favor Keïta’s political party, and it gave the military an opening to remove the president amid clear popular dissatisfaction.

Wagué, the junta spokesperson, hit on those dire themes in his statement: “Our country is sinking into chaos, anarchy, and insecurity mostly due to the fault of the people who are in charge of its destiny.”

It’s that widespread sentiment, ultimately, that has many in Mali pleased to see the former leader removed from power. “This isn’t just a coup against Keïta, but a coup against a system that wasn’t working,” Judd Devermont, the US’s national intelligence officer for Africa from 2015 to 2018, told me.

When Keïta was elected president with a strong mandate in 2013, he had the clear support of the armed forces. That was vital, as Mali’s troops had launched a coup just a year earlier to oust then-President Amadou Toumani Touré — who himself had led the 1991 coup before handing over control to elected civilian leaders.

The hope was that Keïta would usher Mali toward a new democratic future, one divorced from decades of kleptocracy and danger. He greatly disappointed. “Keïta is a creature of the political system,” said Devermont, now at the Center for Strategic and International Studies think tank in Washington. “He behaved very similarly to his predecessors.”

Take corruption: Keïta vowed to fight the graft that had long plagued Mali. “I will bring an end to impunity,” he said after winning the 2013 vote. “I will fight corruption tirelessly. No one will be able to illicitly enrich themselves at the expense of the Malian people.”

But government officials — including his son — seemed to go on doing just that. Earlier this summer, videos leaked showing Karim Keïta, who was chair of the parliament’s defense committee at the time, partying on a luxury yacht while most of Mali’s 19 million people struggled to make ends meet.

Public outrage at the scandal forced him to resign his position in July, but he became the poster child for the country’s general view that elites don’t understand how much better they live than working-class Malians.

Experts told me Karim Keïta likely got his money from the same place other Malian elites get their riches: international funds sent to the country to help the nation develop. Instead of going into the pockets of everyday citizens, millions of dollars go into Bamako construction projects or into the bank accounts of political leaders.

IBK dragged his feet on reforming the economy and instituting anti-corruption reforms, and the people had enough of it. “We are tired and oppressed. Our children are also tired, no school nor enough food to feed our families,” Fotoumata Bathily, a Malian protester, told Voice of America last month. “What we need is Ibrahim Boubacar to leave so the country could prosper.”

That wasn’t all. In 2012, just a year before Keïta became president, armed fighters and jihadists took control of northern Mali. Their influence and the violence that takeover instigated has since metastasized to the central part of the country. This is despite years of military campaigns by Malian forces and French forces (France is Mali’s former colonizer), as well as security assistance from the US and a UN-led peacekeeping mission.

Nothing captures this administration’s Africa “policy” better than this tweet boasting about security assistance while #Mali’s military is literally in the middle of a mutiny. pic.twitter.com/kMVzLhc7Yv

These armed groups have wrought immense havoc in the country. “There was an almost generalized breakdown of authority” in some areas, said ECFR’s Lebovich. Thousands of Malian troops and civilians have died, and hundreds of thousands of people have been displaced due to years of fighting. The violence has even spread into neighboring countries like Burkina Faso and Niger.

“In central Mali, I observed an accumulation of security, judicial, and administrative failures that facilitates mass violence with impunity,” Alioune Tine, a UN human rights expert, said in a statement after visiting the region in February. Those working to improve conditions “have failed to provide adequate security for the civilians of the region.”

The continued danger has angered the military and civilians alike, as Keïta failed to keep them all safe. Experts said anger toward the president continued to grow as they watched their friends, family members, and fellow soldiers die fighting insurgents, militias, and terrorists in a war without end.

Just days before the March parliamentary elections were held, opposition leader Soumaila Cisse was kidnapped while on the campaign trail. There’s still no news as to his whereabouts, though the president repeatedly claimed his government knew who took him.

In April, the country’s Constitutional Court overturned the provisional results of around 30 seats in Parliament, claiming there was widespread fraud in the vote. But critics saw this as a way for Keïta’s party — and Keïta himself, by extension — to seize more power, as members of his party gained more seats than the polls suggested they would have.

People took to the streets to pressure on the president to dissolve the court, which he did in July. But damage had already been done: several demonstrators were killed and numerous opposition figures were jailed during the uprising.

But the protesters, who’d begun calling themselves the June 5 movement, named for the date of the first demonstration, weren’t satisfied — and that dissatisfaction lasted all the way up to the Tuesday’s coup.

What happens next is unclear, but whatever does will dictate the course of the country for years to come.

“The US government should support and amplify the efforts of ECOWAS and the AU to bring a peaceful resolution,” she told me. Without it, it’s possible the junta could dawdle on handing control back to civilian leaders, whether it’s Keïta again (unlikely) or someone else who wins a new election (more likely).

In the meantime, many in Mali will hope that much-needed change has come to the country. “The Malian public are hoping for better governance and the true dividends of democracy,” said CSIS’s Devermont. “For now, they’re welcoming the military’s removal of the government with those hopes.”

Will you become our 20,000th supporter? When the economy took a downturn in the spring and we started asking readers for financial contributions, we weren’t sure how it would go. Today, we’re humbled to say that nearly 20,000 people have chipped in. The reason is both lovely and surprising: Readers told us that they contribute both because they value explanation and because they value that other people can access it, too. We have always believed that explanatory journalism is vital for a functioning democracy. That’s never been more important than today, during a public health crisis, racial justice protests, a recession, and a presidential election. But our distinctive explanatory journalism is expensive, and advertising alone won’t let us keep creating it at the quality and volume this moment requires. Your financial contribution will not constitute a donation, but it will help keep Vox free for all. Contribute today from as little as $3.