Scores of Civilians Are Dead After an Attack in Niger

As many as 100 men and boys were killed in a region under siege by militants, military officials say. …

NIAMEY, Niger — A hundred civilians were killed in attacks by suspected militants in the West African nation of Niger on Saturday, according to government officials.

Armed men shot men and boys in what was said to be a revenge attack on the villages of Tchoma Bangou and Zaroumadareye. The villages are in the southwestern region of Tillabéri, where civilians have increasingly come under attack in the past two years.

The attack, which came just a week after Niger’s presidential election, is one of the country’s deadliest ever. Prime Minister Brigi Rafini, in remarks broadcast Sunday on national television from a visit to the area of the assaults, put the death toll at 100 but did not say who was responsible, Reuters reported.

four American Special Forces soldiers were killed alongside five of their Nigerien colleagues in 2017.

No group has claimed responsibility for the killings, but the militants who have recently been making inroads into Tillabéri are with the Islamic State in the Greater Sahara, a franchise of the Islamic State.

The entire region has become steadily more dangerous for many of those living in it.

Since rebels and armed Islamists took control of cities in neighboring Mali in 2012, the terrorist threat has spread across the Sahel, a strip of land south of the Sahara. At the same time, military forces in several Sahelien countries, including Niger, have carried 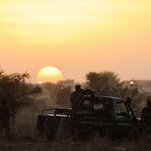