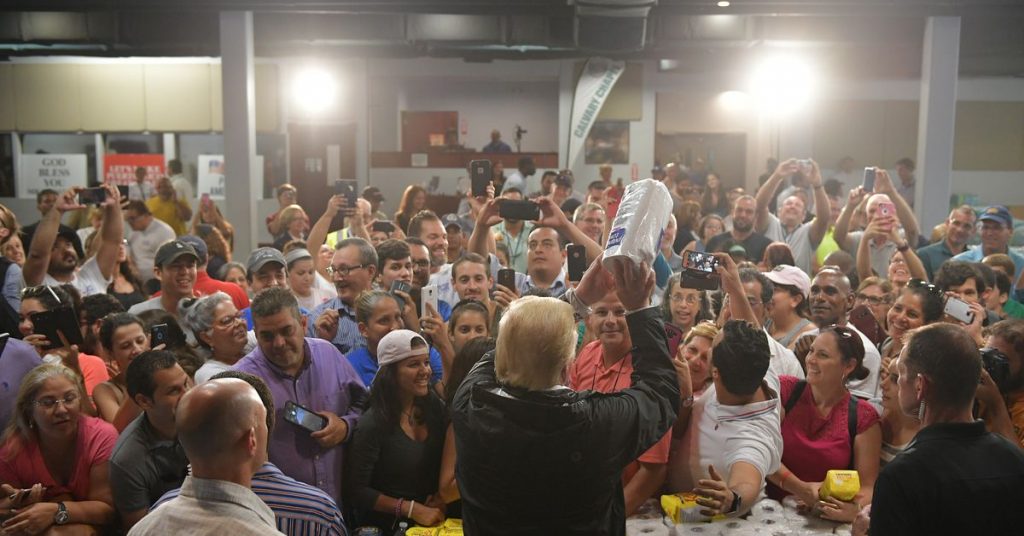 One of the unwritten but traditional roles of the president is to act as a “consoler in chief” during moments of national tragedy. Donald Trump, however, isn’t a traditional president.

On Wednesday, Trump is scheduled to travel to El Paso, Texas, and Dayton, Ohio, two communities ravaged by mass shootings that happened on Saturday and Sunday and took the lives of 22 people and nine people, respectively. But whereas visits from previous presidents under such circumstances would typically be uncontroversial affairs, Trump’s is not.

The White House so far hasn’t said much about what Trump plans to do in each city or what his schedule on Wednesday will be. Kellyanne Conway told reporters that the trip will be similar to previous ones the president has made “trying to help heal communities, meeting with those who are injured, those loved ones who have survived the innocents who have lost their lives so senselessly and tragically. … He meets with local law enforcement, federal law enforcement. He meets with medical professionals. He thanks first responders.”

Trump confirmed the trip on Twitter late Tuesday afternoon, saying he’ll meet with “First Responders, Law Enforcement, and some of the victims of the terrible shooting.”

Will be going to Dayton, Ohio and El Paso, Texas, tomorrow to meet with First Responders, Law Enforcement, and some of the victims of the terrible shootings.

None of that sounds particularly problematic. But two and a half years into his presidency, Trump’s reputation precedes him.

In comments made to reporters, neither El Paso Mayor Dee Margo, a Republican, nor Dayton Mayor Nan Whaley, a Democrat, sounded very enthusiastic about Trump’s travel plans — Whaley even less so than Margo. Their respective frustrations with Trump stem from different sources, but they each say something about why Trump is a uniquely divisive president.

When Trump arrives in El Paso, it will be “the office of the president” that the city is welcoming, Margo said this week.

That was part of the mayor’s unenthusiastic confirmation to reporters this week that he will meet with Trump in his “official capacity” as a “formal duty” — even as he noted that he’ll also “continue to challenge any harmful and inaccurate statements made about El Paso.”

“We will not allow anyone to portray El Paso in a manner that is not consistent with our history and values,” Margo added.

To understand the mayor’s less-than-elated stance, you don’t just need to consider the manifesto prepared by the El Paso shooter, a screed that echoes the “invasion” conspiracy theory about immigrants that Trump has spent the better part of a year pushing and includes specific phrases that seem as though they were directly inspired by tweets Trump posted — you also need to consider Trump’s history with the city itself.

One of the most explicit examples of Trump dehumanizing and demonizing immigrants came in February during a rally in El Paso. During that speech, Trump, in an almost hypnotic fashion, brought up undocumented immigrants and said, “Murders, murders, murders. Killings, murders!” His fans responded by breaking out in “build the wall!” chants.

The footage is chilling to watch six months later in light of what happened last Saturday.

The Trump campaign reportedly still owes the city of El Paso more than $500,000 for expenses related to that rally — a state of affairs El Paso County Commissioner Dave Stout recently described as “ridiculous and unconscionable.” But what particularly irked Mayor Margo were comments Trump made both at the rally and during his State of the Union speech the week before falsely claiming the construction of a border barrier was responsible for El Paso’s drop in crime.

Margo described Trump’s rhetoric about the wall as “ridiculous” and rebuked him on Twitter in February:

El Paso was NEVER one of the MOST dangerous cities in the US. We‘ve had a fence for 10 years and it has impacted illegal immigration and curbed criminal activity. It is NOT the sole deterrent. Law enforcement in our community continues to keep us safe #SOTU

While Trump refuses to acknowledge the role his rhetoric likely played in inspiring the El Paso shooting, presidential candidate Beto O’Rourke and the Congress member representing the district where the El Paso shooting occurred, Democratic Rep. Veronica Escobar, have had no such qualms. They’ve been more outspoken than Margo in advising Trump not to make the trip.

“This president, who helped create the hatred that made Saturday’s tragedy possible, should not come to El Paso,” tweeted O’Rourke, who used to represent El Paso in Congress. “We do not need more division. We need to heal. He has no place here.”

O’Rourke’s sentiments have been echoed by Escobar, who said on Monday’s edition of Morning Joe that “from my perspective, he is not welcome here … he should not come here while we are in mourning.”

But instead of backing off his hardline immigration rhetoric ahead of his trip to El Paso, Trump on Monday indicated in tone-deaf tweets that he actually views the shooting as an opportunity to strike a deal with Democrats in which he’ll support background check legislation in exchange for a bill curtailing legal immigration and perhaps providing additional funding for his border wall. Democrats wasted no time comparing Trump’s attempt to use a mass shooting as leverage with Nazi tactics.

Dayton’s mayor wants Trump to get serious about gun control

Dayton Mayor Whaley also isn’t a fan of Trump’s rhetoric, but she’s been a particularly outspoken critic of Trump’s unwillingness to get serious about gun control policy.

Whaley told reporters on Tuesday that while she’ll “greet” Trump in her “official capacity as mayor,” she has no objections to planned protests of his presence because “his rhetoric has been painful for many in our community, and I think people should stand up and say they’re not happy if they’re not happy he’s coming.”

R: Your reaction to Trump coming?

DAYTON MAYOR WHALEY: He’s POTUS & as he has an official capacity as POTUS – I have a capacity as mayor – I will greet him

R: What about protesters?

WHALEY: He’s made this bed & he’s gotta lie in it … his rhetoric has been painful for many pic.twitter.com/GkKWh0SyY8

Whaley went on to criticize the speech Trump gave from the White House on Monday — one in which he said “mental illness and hatred pulls the trigger, not the gun” — for obfuscating the need for gun control.

“I’m disappointed with his remarks,” she said. “I think they fell really short. He mentioned gun issues, like, one time. I think watching the president over the past few years on the issue of guns, I don’t know if he knows what he believes, frankly.”

During that same speech, Trump mistakenly claimed that the shooting in Ohio took place in Toledo, not Dayton. Whaley dinged him for that flub on Monday, saying, “I’ve heard that [President Trump’s] coming Wednesday but I have not gotten a call. And you know he might be going to Toledo, I don’t know.”

Mayor of Dayton Nan Whaley: “I’ve heard that [President Trump’s] coming Wednesday but I have not gotten a call. And you know he might be going to Toledo, I don’t know.” pic.twitter.com/CYnyF6hA31

Whaley made perhaps her most explicit case for gun control during a CNN interview, saying of the .223-caliber high-capacity rifle with 100-round magazines that the Dayton gunman wielded, “I don’t really know why any citizen would need this kind of gun at any time.” Trump, however, has tried to pin blame for the El Paso and Dayton shootings on anything and everything besides guns, even suggesting during his Monday speech that violent video games may have played a role.

It’s abundantly clear by now that Trump is a divider, not a uniter — at least when he speaks off the cuff

Two and a half years into his presidency, it’s clear that the role of “uniter in chief” is one that Trump struggles with. He is who he is.

Recall that in the wake of violence breaking out at the white supremacist rallies in Charlottesville, Virginia, in August 2017 that left a counterprotester dead, Trump read a speech in which he denounced “the KKK, neo-Nazis, white supremacists and other hate groups.” But during a news conference the very next day, he was widely criticized for saying what he really thought, which was that there was blame to go around and “very fine people on both sides.”

Trump reading from a teleprompter vs. Trump saying what he really feels.

(His two statements about Charlottesville in this video happened one day apart, on August 14 and 15, 2017.) pic.twitter.com/0GpxAawO1n

After a gunman killed 11 people at a synagogue in Pittsburgh last October in a shooting that was also motivated by “invasion” conspiracy theories that the president has given voice to, Trump responded by reading a speech in which he denounced the “evil anti-Semitic attack.” But during unscripted comments later that same day, he lamented that there wasn’t an armed guard inside the synagogue.

“If they had some kind of a protection inside the temple, maybe it could have been a very much different situation,” Trump said. “But they didn’t.”

Trump’s subsequent visit to Pittsburgh to pay his respects at the synagogue was shunned by local elected officials. CNN reported that protesters nearby greeted the president with signs bearing slogans like “Words Matter,” “Strength through Unity,” “Watch Your Words,” and “Hate does not work in our Neighborhoods.”

Trump has already worked through a similar progression this week. His White House speech on Tuesday — in which he said that “in one voice, our nation must condemn racism, bigotry, and white supremacy” — was preceded by the aforementioned tweets in which he seemed to view the El Paso shooting as leverage for an immigration deal, and was followed up by tweets he posted on Tuesday dismissing the idea that he bears any responsibility for the El Paso shooting as a “narrative” while trying to shift blame onto former President Obama.

So to the extent that Trump follows the script prepared by his staff on Wednesday, he might be able to get through the day without creating any controversies. Perhaps he’ll even receive glowing coverage from major publications. But if he starts speaking off the cuff, it’s possible another “very fine people” moment is on the horizon.