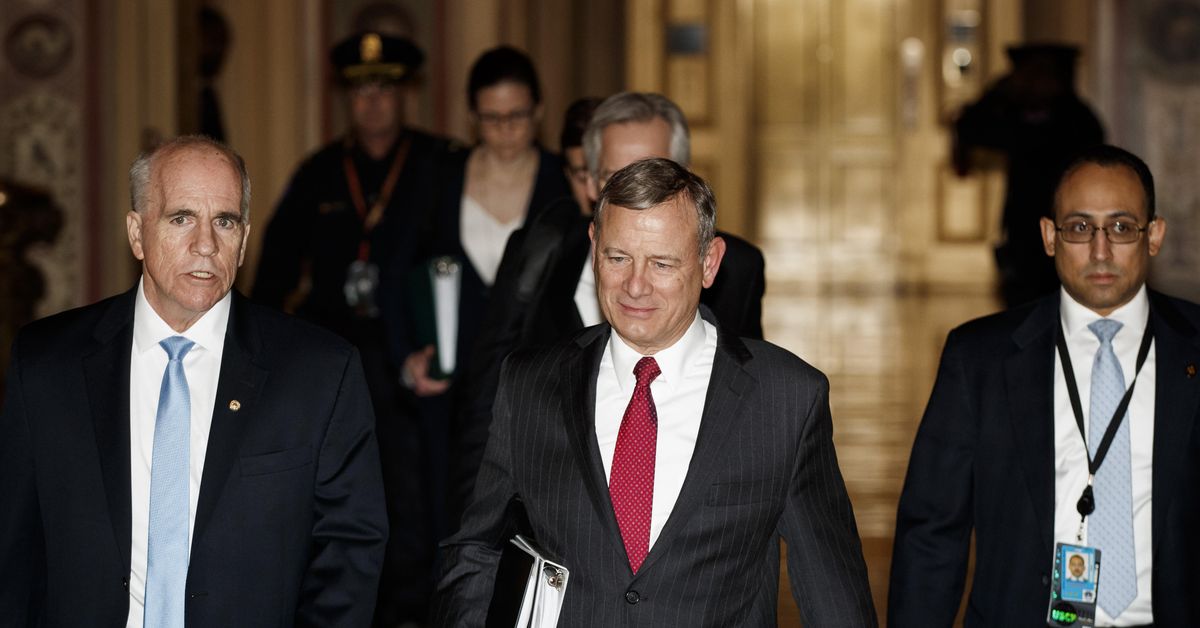 Supreme Court Chief Justice John Roberts issued a stern warning to the House impeachment managers and President Donald Trump’s counsel in the final hours of the first day of the Senate impeachment trial after speeches by both sides began to feature personal attacks.

Both House Judiciary Committee Chair Jerry Nadler and White House counsel Pat Cipollone and Trump’s personal lawyer Jay Sekulow called each other liars; Nadler accused senators of treachery; and Sekulow said it was Nadler who was being treacherous.

“It is appropriate at this point for me to admonish both the House managers and the president’s counsel in equal terms to remember that they are addressing the world’s greatest deliberative body,” Roberts said. “Those addressing the Senate should remember where they are.”

The tension that led to those remarks seemed to have little to do with either side forgetting where they were, however, and more to do with Democrats’ frustration over the counsel’s willingness to misrepresent key facts — and at times, to simply lie.

Deception and misrepresentation have been key aspects of the president’s impeachment defense strategy so far; for instance, he responded to Tuesday’s proceedings by tweeting everyone ought to “READ THE TRANSCRIPTS!”

These transcripts do not exonerate him — instead, they provide evidence that Trump did indeed attempt to pressure Ukraine into investigating his political rivals. But Trump has argued the opposite is true, and Tuesday, his counsel signaled it will pursue a similar strategy in defending the president against removal.

Democrats would argue that makes Roberts’s rebuke misplaced — that it is the president’s behavior that is at issue here. They do not appear to have an ally in Roberts, however, whose conduct Tuesday suggested that so long as the discourse doesn’t descend into name-calling, he will allow each side to say what it will, true or not.

The speeches that drew the chief justice’s censure began after House Minority Leader Chuck Schumer introduced an amendment to the resolution governing the trial’s rules, calling for the testimony of former National Security Adviser John Bolton.

Nadler took the floor in defense of the amendment, explaining why he and his fellow House impeachment managers believe Bolton’s testimony to be so important — namely, that Bolton is a key witness to Trump’s Ukrainian pressure campaign, and that he’s suggested he has some damning knowledge that has yet to come to light — before ending his speech by addressing the Senate directly (and harshly).

“Will you choose to be complicit in the president’s coverup?” Nadler asked. “So far, I’m sad to say I see a lot of senators voting for a coverup, voting to deny witnesses — an absolutely indefensible vote, obviously a treacherous vote.”

White House counsel Pat Cipollone offered a rebuttal, attacking Nadler and the “false case of the House managers,” and taking it upon himself to defend the senators, telling them, “You don’t deserve, and we don’t deserve what just happened.”

Pat Cipollone rebuts argument in favor of amendment to issue subpoena for John Bolton, saying Rep. Nadler made “false allegations” and “should be embarrassed…for the way [he] addressed this body.”

“This is the U.S. Senate. You’re not in charge here.” https://t.co/YliqkRpTBy pic.twitter.com/PNLUAtYWEp

Cipollone then accused the lawmaker of being a hypocrite as well, reading a quote from a statement Nadler made during President Bill Clinton’s impeachment proceedings in which he argued “a narrowly voted impeachment or an impeachment substantially supported by one of our major political parties and largely opposed by the other” would be illegitimate, and would “call into question the very legitimacy of our political institutions.”

His fellow counsel, Jay Sekulow, followed this up with one of his own, directly addressing Nadler, with a fiery argument in which he, too, accused Nadler of hypocrisy and claimed that it was Nadler who was treacherous.

That’s when Nadler returned to the floor to call Cipollone and Sekulow liars.

“The president’s counsel has no standing to talk about lying,” Nadler said, pointing out that the counsel lied about Trump not being invited to take part in the impeachment inquiry. He told the Senate he personally had invited Trump — which is true — and that “a few days later, we received a letter from Mr. Cipollone on the White House stationary that said, ‘No, there’s no interest in appearing.’ So on the one hand, they’re lying —”

Nadler cut himself off there, and returned to his effort to rebut the White House’s claims with facts. But he returned to his point when concluding his remarks, saying the president “defies everything. Defies the law to withhold aid from Ukraine. Defies the law in a dozen different directions, all the time. And lies about it, all the time. And sends Mr. Cipollone here to lie about it.”

After a day that was relatively staid — particularly in comparison to the impeachment proceedings in the House — these exchanges stood out. Chief Justice John Roberts, who until this point had only spoken to preside over procedural issues, felt he had to comment, saying:

I think it is appropriate at this point for me to admonish both the House managers and the president’s counsel in equal terms to remember that they are addressing the world’s greatest deliberative body. One reason it has earned that title is because its members avoid speaking in a manner and using language that is not conducive to civil discourse. In the 1905 Swain trial, a senator objected when one of the managers used the word pettifogging, and the presiding officer said the word ought not to have been used. I don’t think that we need to aspire to that high a standard, but I do think those addressing the Senate should remember where they are.

In the past, tensions in the Senate have broken out into violence, particularly when one senator has accused another of being a liar, which is why Sen. Ben Tillman punched Sen. John McLaurin in 1902. It was that incident that led to the creation of the rules governing how senators are to speak about each other, namely: “No Senator in debate shall, directly or indirectly, by any form of words impute to another Senator or to other Senators any conduct or motive unworthy or unbecoming a Senator.”

Impeachment trials have their own special rules that do not include a similar clause; however, Roberts clearly hoped to tamp down passions in order to keep up the Senate’s normal, subdued sense of decorum.

But Democrats — particularly those in the House — have argued there are times when decorum deserves to be broken; for instance, House Speaker Nancy Pelosi was censured for calling a nativist Trump attack on lawmakers “racist” in July, breaking the House rule that states “personal abuse, innuendo, or ridicule of the President is not permitted.”

Pelosi accepted her punishment — not being allowed to speak on the House floor for a day — and was praised by many members of her caucus, like Rep. Jamie Raskin, who said, “The speaker engaged in a small-but-necessary act of legislative civil disobedience. … She needed to tell the truth about the president’s remarks.”

Tuesday, the House impeachment managers tried to do the same. Nadler was correct in asserting the White House counsel was lying to the Senate. As Vox’s Aaron Rupar noted, the defense team’s opening remarks alone contained at least four easily refuted lies. And as the proceedings went on, those lies — particularly the claim that Trump had been barred from participating in the impeachment inquiry — were repeated.

Nadler’s statements were an attempt to push back against these false claims — and given the fact that they were delivered after more than 10 hours of deliberation, they may have been couched in some frustration.

Given that frustration, and the length of the day, working to avoiding fistfights on the Senate floor is admirable. And it is important that the drama of the trial be contained to discussions of presidential wrongdoing, rather than on fights.

But if there is no way for either side to openly challenge when the other side is not presenting arguments based on the facts, there is little point in having the trial at all. The way it will end seems predetermined, and what Trump did with respect to Ukraine is clear, meaning its value lies in hearing the best — fact-based — cases for why the president does or does not deserve removal.