China Sends Warning to U.S. and Taiwan With Aerial Drill

Beijing sent 18 aircraft into the Taiwan Strait as a senior American diplomat held meetings on the island. …

China sent 18 fighter jets and bombers into the Taiwan Strait on Friday in a robust show of force that a military official in Beijing said was a warning to Taiwan and the United States about their increasing political and military cooperation.

“Those who play with fire are bound to get burned,” Senior Col. Ren Guoqiang, a spokesman for the Chinese Ministry of National Defense, said at a briefing in Beijing, warning the United States and Taiwan against what he called “collusion.”

The aerial drill came as a senior American diplomat held a series of meetings in Taiwan ahead of a formal memorial service on Saturday for former President Lee Teng-hui, who led the island’s transition from military rule to democracy.

Taiwan, the self-governing democracy that Beijing claims as part of a unified China, has become an increasingly tense issue in the deteriorating relations between China and the United States. Both sides have stepped up military operations around Taiwan, while accusing the other of risking a potentially dangerous clash.

Previous flights probing Taiwan’s air defense zones have generally involved pairs of aircraft, not so many at once approaching from multiple directions. That suggested Friday’s flights were intended as an escalatory warning.

The Chinese aircraft, including two H-6 strategic bombers, crossed the median line between the mainland and Taiwan in the strait from four different directions, according to officials and news reports from both sides.

The planes crossed into Taiwan’s southwestern air identification zone before returning to the mainland, according to the Ministry of National Defense in Taiwan, which said that it had scrambled fighter jets and activated its air-defense missile systems to track the Chinese aircraft. 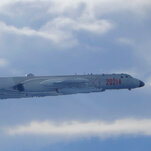