“Driving home from the hospital with no baby,” Ms. Teigen wrote on Twitter. “How can this be real.” She said she and her husband had decided to call the infant Jack. …

The model and cookbook author Chrissy Teigen said late Wednesday that she and her husband, the singer John Legend, had lost their third child, a son, days after she posted on social media about suffering pregnancy complications.

“Driving home from the hospital with no baby,” Ms. Teigen wrote on Twitter. “How can this be real.”

Ms. Teigen posted a black-and-white photograph on Twitter and Instagram that showed her sitting on a hospital bed with her hands clasped in a prayer-like position, seemingly in tears. Another Instagram photo shows her holding her baby as Mr. Legend kisses her shoulder.

pregnancy discrimination is widespread, and organizations that provide family-planning or abortion services are often targeted by conservative officials, and miscarriages are still largely spoken of in hushed tones.

“What nobody tells you is that miscarriage happens all the time, to more women than you’d ever guess, given the relative silence around it,” Mrs. Obama wrote in “Becoming,” her 2018 memoir. “I learned this only after I mentioned that I’d miscarried to a couple of friends, who responded by heaping me with love and support and also their own miscarriage stories.”

Ms. Teigen was believed to have been halfway along in her pregnancy. Last month, she let it slip that she was expecting a baby boy.

She said this week on Instagram that she was hospitalized on Sunday because of excessive bleeding from her placenta. She 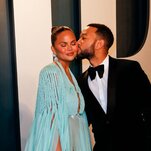