The bloc wants to persuade its most anti-immigrant member countries to agree to a common policy. But the future of its new plan, like many of its details, remains uncertain. …

BRUSSELS — The European Union on Wednesday unveiled a new attempt to cajole reluctant member nations into participating in a common system for handling asylum seekers, offering them both cash incentives to take in refugees and quicker deportation of people who are denied asylum.

The proposal by the European Commission, the bloc’s executive branch, would end the quotas adopted five years ago that set the number of refugees each country should accept — quotas that some countries, like Hungary, have simply ignored without penalty.

The commission would replace that system with one it hopes would win the cooperation of all 27 member states, but it omitted crucial details about how the new arrangement would work. It did not make clear, for example, what penalties, if any, there would be for any E.U. countries that refuse to take part.

It would also continue to place a large burden on Greece, Italy and Spain — countries at Europe’s southern edge, where undocumented migrants most often arrive on the continent. Those countries have chafed at taking the lead in processing asylum applications, which can take more than a year, and at hosting thousands of migrants until they are either granted asylum or deported.

The European Commission plan would offer countries like Denmark, Austria, Poland and Hungary 10,000 euros, about $11,700, for each refugee they accept, ostensibly to cover early costs of travel and housing. It also invites countries in the bloc to assist in the long, cumbersome process of trying to send rejected asylum seekers back to their home countries.

It is not yet clear whether the proposal — laid out in more than 500 pages of documents released on Wednesday, and touching on more than a 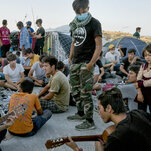