In Israel, Infections Drop Sharply After One Shot of Vaccine

Initial studies show a significant drop in infections and hospitalizations after just one dose, and very few cases after two. Experts caution that the results are preliminary. …

JERUSALEM — Israel, which leads the world in vaccinating its population against the coronavirus, has produced some encouraging news: Early results show a significant drop in infection after just one shot of a two-dose vaccine, and better than expected results after both doses.

Public health experts caution that the data, based on the Pfizer-BioNTech vaccine, is preliminary and has not been subjected to clinical trials. Even so, Dr. Anat Ekka Zohar, vice president of Maccabi Health Services, one of the Israeli health maintenance organizations that released the data, called it “very encouraging.”

In the first early report, Clalit, Israel’s largest health fund, compared 200,000 people aged 60 or over who received a first dose of the vaccine to a matched group of 200,000 who had not been vaccinated yet. It said that 14 to 18 days after their shots, the partially vaccinated patients were 33 percent less likely to be infected.

At about the same time, Maccabi’s research arm said it had found an even larger drop in infections after just one dose: a decrease of about 60 percent, 13 to 21 days after the first shot, in the first 430,000 people to receive it.

Maccabi did not specify an age group or whether it had compared the data with a matched, non-vaccinated cohort.

On Monday, the Israeli Health Ministry and Maccabi released new data on people who had received both doses of the vaccine, showing extremely high rates of effectiveness. 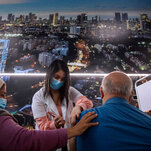