The death toll has passed 700, with more than 80 killed on Friday in one city alone, a rights group said. …

The Myanmar military’s bloody crackdown on the nationwide resistance to its rule showed no sign of easing on Sunday, with a human rights group reporting that the death toll across the country had passed 700.

The security forces killed 82 people in a single city on Friday, according to the group, the Assistance Association for Political Prisoners, which has been documenting the bloodshed since the military’s Feb. 1 coup. Soldiers used machine guns and rocket-propelled grenades to attack an organized group of protesters who had set up barricades to defend part of that city, Bago.

The military appears to be targeting centers of resistance around the country, using overwhelming power against largely untrained, poorly armed protesters. In Tamu, a town near the border with India, members of a local defense group similar to the one in Bago claimed to have killed some members of the security forces on Saturday after coming under attack.

The security forces’ assault in Bago, about 40 miles northeast of Yangon, Myanmar’s largest city, was one of their most lethal yet. A reputable news outlet, Myanmar Now, also put the death toll in Bago at 82.

On Friday, a spokesman for the junta, Maj. Gen. Zaw Min Tun, suggested that the military had been exercising restraint since the coup, telling reporters that it could be killing many more people if it wished.

“If we were to actually shoot the protesters with an automatic rifle, the 500 people you are talking about would have died within hours,” he said after being asked about the nationwide toll.

A leader of the 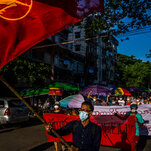