Russia Freezes Navalny’s Assets as He Recovers From Poisoning

Aleksei A. Navalny was still in a medically induced coma in Berlin when a court in Russia froze his bank accounts and barred him from selling or mortgaging his apartment in Moscow. …

MOSCOW — The Russian authorities froze the assets of Aleksei A. Navalny, the Russian opposition leader poisoned last month, at the behest of a Kremlin-allied businessman known as “Putin’s chef,” Mr. Navalny’s spokeswoman said on Thursday.

Mr. Navalny, President Vladimir V. Putin’s most prominent domestic opponent in Russia, was still in a medically induced coma in a hospital in Berlin when his assets were frozen.

A court barred Mr. Navalny from selling or mortgaging his apartment in southeastern Moscow, and his bank accounts have been frozen, Kira Yarmysh, the spokeswoman, said in a video posted to her Twitter account. The order was dated Aug. 27, a week after Mr. Navalny was poisoned with the military-grade nerve agent Novichok. But his lawyers learned of the court’s decision only recently, Ms. Yarmysh said.

The legal maneuver was brought on by Yevgeny Prigozhin, the catering magnate who is close to Mr. Putin and is known as “Putin’s chef.” In August, Mr. Prigozhin moved to collect damages that Mr. Navalny owed in a libel lawsuit from 2019 — and coyly pledged to pursue the debt as long as Mr. Navalny survived the poisoning.

“Of course, if Comrade Navalny gives his soul to God, then I personally do not intend to go after him in this world,” Mr. Prigozhin said in a statement last month.

Mr. Navalny was released from the Berlin hospital on Wednesday, 32 days after being evacuated by air from Siberia, where he was poisoned.

The Russian authorities have frozen the assets of Mr. Navalny and 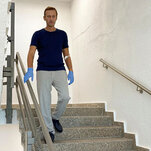