Will the Super Bowl Cause a Coronavirus Surge?

Just as the United States seems to have emerged from the worst of a surge in coronavirus cases that ravaged the country for months and peaked after Americans crowded indoors for the winter holidays, public health officials are concerned about another potential superspreader date: Super Bowl Sunday.

January was the country’s deadliest month so far in the pandemic, accounting for 20 percent, or 95,246, of the more than 460,000 coronavirus deaths the United States has recorded in the past 12 months. That’s more people than could fit into even the largest N.F.L. stadium. More than 27 million cases have been recorded, according to a New York Times database.

Experts worry that football fans gathering on Sunday in Tampa, Fla., for the championship game between the Kansas City Chiefs and the Tampa Bay Buccaneers, or at watch parties across the country, could set back the nascent progress of recent weeks.

The daily reports of new cases and deaths remain high but have fallen somewhat. The seven-day average of new case reports in the U.S. dropped to 125,804 on Friday, the lowest level since Nov. 10. Reports of deaths, a lagging indicator because patients who die from Covid-19 generally do so weeks after being infected, averaged 2,913 a day, the lowest rate since Jan. 7.

1.3 million vaccine doses a day on average, as the Biden administration pushes to speed distribution before more contagious variants that might evade vaccines can become dominant. The N.F.L. has offered President Biden all 30 of its stadiums for use as mass vaccination 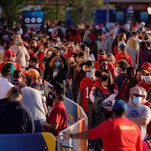