On Racism and British Fashion

The designer Osman Yousefzada reflects on change in the industry, straddling cultures and why he looked beyond fashion to find his voice. …

“I’ve always considered myself an outsider,” Osman Yousefzada said last week, sitting on a park bench near his home in North London. “Often, I’ve also been made to feel like an outsider, working in and around institutions and industries like fashion that are rooted in white codes and elitism.”

At 43, he is an established fashion designer (his sculptural silhouettes have been worn by Lady Gaga, Beyoncé and Taylor Swift); an artist (see 2018’s “Being Somewhere Else,” an exhibition on the subjects of race and migration at the Ikon Gallery); a filmmaker (for June’s digital London Fashion Week he showed “Her Dreams Are Bigger,” about Bangladeshi garment workers imagining the wearers of the clothes they made); and the author of “The Go-Between,” a memoir that will be released next year.

The book traces his life from his birth, in 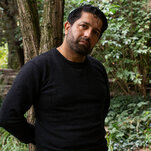